In its commitment to support and improve access to education through shelter that will support learners with proper infrastructure to realize their future dreams, CDH Investment Bank (CDHIB) has donated K15m to University of North Carolina (UNC) Project to support its education project at Dzama Educational Development Program in Lilongwe.

As part of its 10th Anniversary celebrations which were celebrated — under the theme, ‘Creating Value’ — CDH Investment Bank (CDHIB) on 30th November 2022 donated K16.9 million Kwacha to Mary’s Meals towards the construction of a kitchen and a learners feeding block at Mbinda Primary School in Blantyre.

The anniversary celebration activities seek to Create Value by giving back to the community through supporting initiatives that will help develop the nation. The school, located at Somba in Blantyre Rural, was established in 2003 under the Joshua Foundation and was later handed over to the Ministry of Education in 2009.
Speaking during the donation held at Mary’s Meals offices at Ginnery Corner in Blantyre, CDHIB Chief Executive Officer (CEO), Kwame Ahadzi said they thought of partnering Mary’s Meals after learning about the challenges being encountered at Mbinda School, which was making learning difficult for the pupils.

CDH Investment Bank participated in the 2022 Swing to Serve Presidential Charity Golf Initiative. The golf tournament was held at the Lilongwe Golf Club on Saturday 8th October 2022 and was hosted by His Excellency, the President of the Republic of Malawi, Dr Lazarus McCarthy Chakwera, supported by Dr Saulosi Chilima, the Vice President. The tournament was held to raise funds for charitable causes affecting the most vulnerable.

CDH Investment Bank contributed K1million towards the golf tournament. The bank was pleased to support the initiative which fits its corporate social responsibility (CSR) Policy that aims to support vulnerable people. CDH Investment Bank CSR policy supports education as one of our pillars for development and so the cause to assist deserving needy tertiary students to complete their studies is one.

Managed by its founder, Courageous Musasa — a 28-year-old former street begging child — amongst its most needs are fuel wood to prepare hard earned food, which CDH Investment Bank has relieved them off through the huge tree logs it donated on Tuesday.

CDH Investment Bank, which is celebrating 10 years of its existence, donated K3.5 million to Beit Cure International Hospital in Blantyre towards the promotion of free community health among children. The donation, presented on Wednesday during the celebration of 20 years of partnership between the Beit Trust and Cure Hospital, where there was also a handover ceremony of surgical equipment donated by the Beit Trust to Beit Cure.

In its efforts to boost access to blood transfusions for hard-to-reach areas across the country, Malawi Blood Transfusion Services (MBTS) is on a drive to place blood bank fridges in district hospitals that have several other health centres surrounding it.

To meet its target, MBTS is engaging the private sector for funding contributions, which CDH Investment Bank has responded to by donating K2 million which will go towards the purchase of a blood bank fridge earmarked for Mangochi, whose outreach stations are Monkey Bay Health Centre and Mulibwanji Mission Hospital. 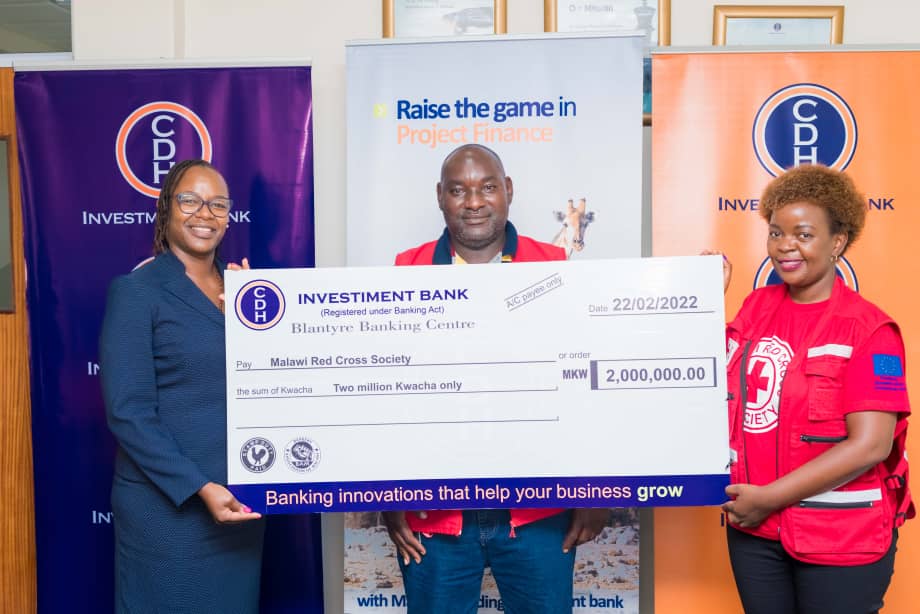 CDH Investment Bank donated K2 million to Malawi Red Cross Society to support people who were affected by Tropical Storm Ana. Presenting the donation, CDHIB’s Capital City Banking Centre Manager, Mrs Jennie Madinga, said that it was disheartening to see the devastation that the cyclone caused, including loss of life and property and loss of livelihood, in the affected districts of Chikwawa, Nsanje, Mulanje and Phalombe. Receiving the donation, Red Cross Society’s Director of Programs, Ms Prisca Chisala said that the support would go a long way towards providing the affected people with everyday basic needs such as food.

CDH Investment Bank donates essential medical equipment and supplies worth K27.8 million to the Society of Medical Doctors of Malawi to assist in the fight against COVID-19 CDH Investment Bank on Wednesday 24th February 2021 donated various essential medical equipment and supplies worth K27.8 million to the Society of Medical Doctors in Malawi (SMD) to assist in the fight against the COVID-19 pandemic. The items donated include oxygen cylinders, oxygen flowmeters and regulators, pulse oximeters and other equipment and materials. The donation is in line with the bank’s pillar to give back and support the community through social initiatives that make impact. 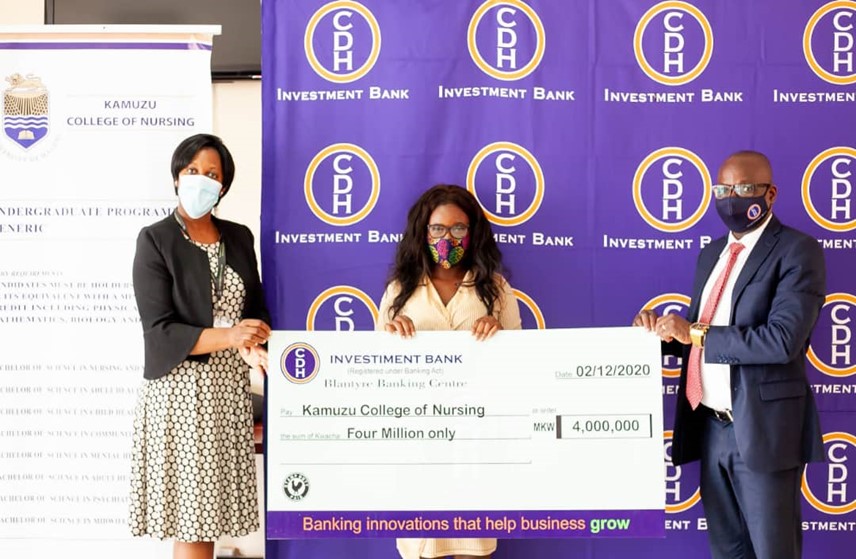 CDH Investment Bank has donated K4 million to the Kamuzu College of Nursing (KCN), a constituent college of the University of Malawi. The donation was made to support students access online learning equipment, including internet dongles, tables and computers. The equipment will allow nursing students to attend classes remotely as the college enforces social distance learning methods during the Coronavirus (COVID-19) pandemic period. CDH Investment Bank has donated K3.5 million to Beit Cure International Hospital, in Blantyre. The donation was made in order to support the hospital sustain charitable paediatric surgeries which it carries out to children at the hospital. Making the donation, CDH Investment Bank’s Chief Treasury Officer, Mr Paul Nyachiwowa expressed the bank’s appreciation to the hospital for the great work they do in supporting children with disabilities. “we are touched by your great spirit of service especially towards children and we have been compelled to support you”. He said that during this time, when the world is battling the negative effects of the COVID-19 pandemic, we hear that operations at the Beit Cure International Hospital have been negatively affected.

CDH Investment Bank has donated K7 million to the University of Malawi, The Polytechnic to assist the University in the production of COVID-19 Personal Protective Equipment (PPE). The bank partnered with The Polytechnic as one way of promoting local talent and to encourage the innovation that is being done by students at the university in coming up with technological interventions to help in the fight against COVID-19.

Send us an email